Update: Zarkana closed on April 30, 2016. We’re sad to see it go!
Zarkana is my favorite Cirque du Soleil show on the Las Vegas Strip for several reasons including amazing costumes and characters, spectacular variety of acts, comfortable theater, and the ability to take photos during the performance.

The Zarkana Theater on the second floor of the Aria Resort & Casino is the best theater in Vegas in terms of comfort and amenities. The seats in the first 3 sections – 102, 103, and 104 – have very cushy individual seats setup in a couch design. You can put your armrest down to separate yourself from your neighbor, or keep it up and snuggle with your partner for a romantic atmosphere. 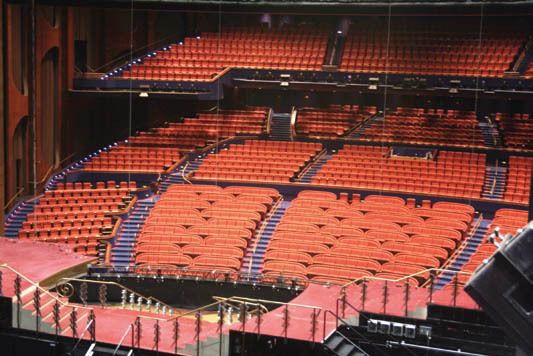 There is a ledge for drinks, popcorn, or your handbag, so you don’t have to put it on the floor. You would be surprised how much of a help this ledge was for your belongings and increased leg room! 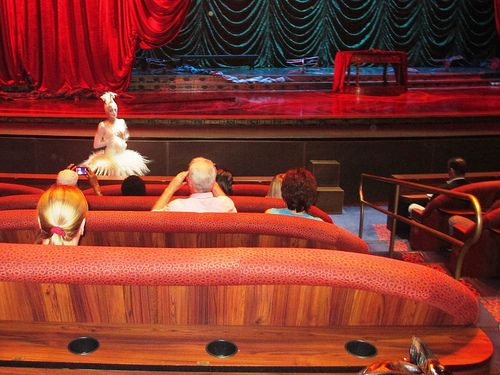 The Golden Circle are the premier seats in the theater for the show. These seats cost $180 each so they are more expensive than any other seat in the house. In my opinion, any seat in the first three sections are perfect providing a good view, and make you feel apart of the act. In fact, the cast will choose several audience members at random to come up on stage from these front three sections. So, if you don’t want to be part of the show, you may prefer the 200 level sections.
We sat in the 5th row back in section 104 on the aisle, so we were directly across the aisle from the Golden Circle, paid much less than those in the Circle, and felt that we got a great deal!

While I found the storyline hard to follow, I thought the costumes and characters were the most flamboyant, funny, and varied of any other Cirque show.

The Zarkana Wheel of Death was an exhilarating ride and keeps you on the edge of your seat! It looks as though the two men who perform this act are identical twin brothers with the same build and size body to perfectly offset each other. I sure didn’t do that well in physics class back in high school, but I can tell you these two performers were defying the laws of nature in this amazing display of courage!

The Zarkana Web has become the iconic backdrop of the show, and is where the breathtaking flying trapeze act takes place while Tarantula, the spider lady looks on.

The Sand Painter was unlike any act I’ve ever seen in Vegas, or anywhere else. Time after time, the artist recreated the story of Zarkana in sand images that should be hung in a gallery, but instead are wiped away as quickly as she created them. It was gorgeous and heart-breaking at the same time.

The High Wire act in Zarkana is not your everyday circus act. The snake lady in the background sets the stage for a dangerous act, surrounded by firebreathers, while two men perform truly scary high wire acts, all while trying to avoid a swinging ball of fire!

Is Zarkana a show for kids?

The age limits for the show are 5 and up. While some of the humor will certainly be lost on young children, there is nothing inappropriate for children in the show and is family friendly.

Can you take photos in Zarkana?

Yes! As long as you don’t use flash during the performance, photo taking is fine, unlike most shows on the Strip.

How long is Zarkana?

Can we bring or buy food and drinks into Zarkana?

Yes and yes! You can buy popcorn and drinks at the Showroom Bar. And you can bring any other drinks as long as they are in a plastic container into the theater.